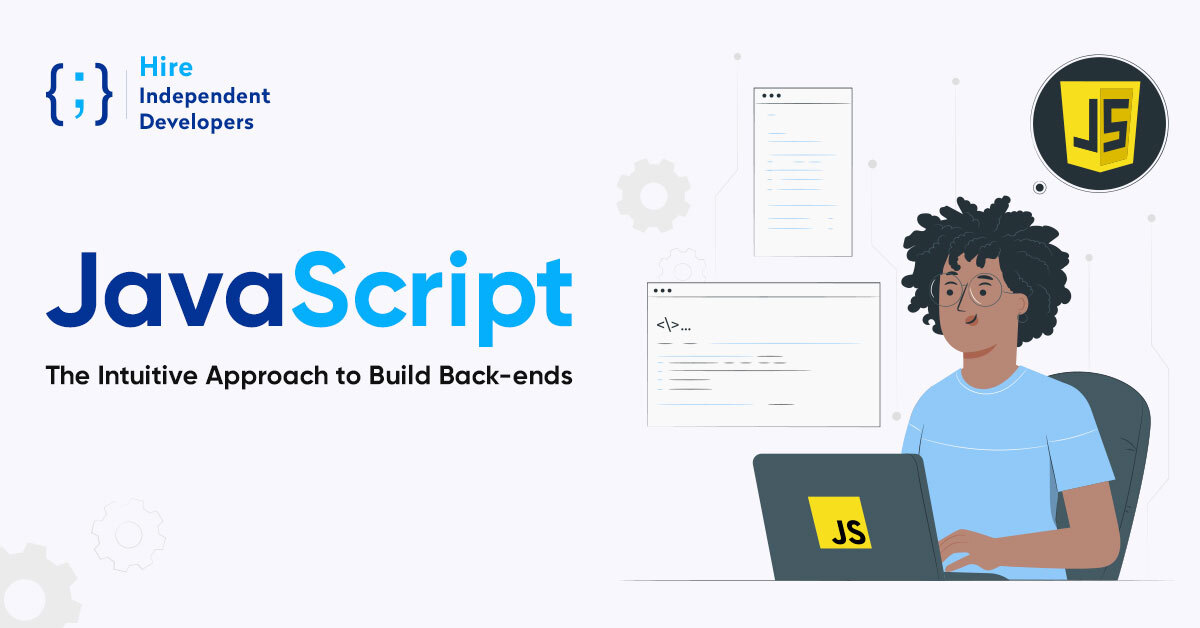 Brendon Eich introduced JavaScript as an intuitive scripting programming technology to manipulate the DOM of the Netscape Browser. At that time, JavaScript was primarily being utilized for Web Front-end development.

We have already detailed the crucial information related to front-end JS frameworks, and now is the right time to look at JavaScript’s contribution in the back-end!

If you want to build a JavaScript-based back-end app, then which framework should you select? This write-up will share all the crucial information required for a product owner to work with JavaScript in back-end development.

Over the last decade, NodeJS has gained exceptional popularity. The popularity and success of NodeJS have made JavaScript the “lingua franca” of the server-side and client-side web. Nowadays, JavaScript ranks at the top of the most popular Server–side programming technologies.

Benefits of JavaScript in Back-end ( Taking example of NodeJS)

JavaScript has significantly proven to be an undisputed leader among the most popular programming technologies. In turn, NodeJS has become a stand-alone name in the industry.

With a huge number of downloads and millions of new contributors, the project seems to be stronger than ever.

Using NodeJS for the back-end, you automatically get all the pros of full-stack JavaScript development:

Consequently, your development team is a lot more flexible, less time-consuming, and as a result, you get quick and reliable software. Programmers trained in front-end JavaScript can start programming the server-side with minimum effort.

One word – npm, a default NodeJS package manager, also serves as a marketplace for open-source JavaScript tools, which plays a significant role in this technology. With about one million libraries available in the npm registry as of now, and more than 10,000 new ones being published every season, the NodeJS ecosystem is quite rich.

Similar stats point out that 97 percent of modern web apps consist of npm modules. And that is proof of its undisputable popularity among the community of developers.

With such a wide variety of free tools accessible in a few clicks, there is a huge potential for the use of NodeJS. At the same time, open-source software enjoys emerging popularity as it enables you to develop new solutions reducing the overall development cost and time to market.

Although other back-end technologies like Ruby on Rails and PHP can use JSON format for communication, NodeJS does it without transforming between binary models and utilizes JavaScript.

This is especially handy when you have to develop RESTful APIs for NoSQL database compatibility, like MongoDB – which letter M represents in the MEAN stack. This rapid communication with one of the main data transfer standards is another benefit of using the JavaScript ecosystem.

Express is also known as a “framework of other frameworks.” It is less opinionated and speedy. Several frameworks are developed based on Express.

The core team members of ExpressJS created Koa as a lightweight, modern, expressive, and robust middleware framework for Web Applications and APIs. Koa is hugely modular with a tiny Core with no middleware. However, middleware is available as separate modules.

Facebook’s front-end library is the most popular Web front-end library. React is opinionated and doesn’t offer an end-to-end framework. That’s why A development team from the Dutch software company Zeit has developed NextJS as an end-to-end top-level Web Framework on top of NodeJS and ReactJS. Next.js offers both Static and Server-Rendered Web sites for Desktop, Web, and Mobile devices.

A Google Engineer back then, “Evan You” has created a beginner-friendly and simple yet powerful JavaScript front-end framework, VueJS. With time, VueJS has evolved into one of the two most popular Web frameworks. Although VueJS is more opinionated than React, it still doesn’t support comprehensive features like Ember or Angular.

A team of Software Engineers led by Sebastien Chopin and Alexandre Chopin has built NuxtJS as a higher level, end-to-end Web App framework on top of NodeJS and VueJS.

It is a minimalistic Server-Side Web Framework with an entire focus on developer experience and app performance. ExpressJS and Hapi inspired it.

Scope of JavaScript in Backend Development

Following are the key reasons why JavaScript (NodeJS) won’t disappear in the near future.

The information provided in this write-up would have provided you with an exceptional understanding of JavaScript’s past, present, and future in back-end web development. With a wide range of exclusive JavaScript frameworks, plugins, and development tools, you can easily implement intuitive ideas for your website’s back-end.