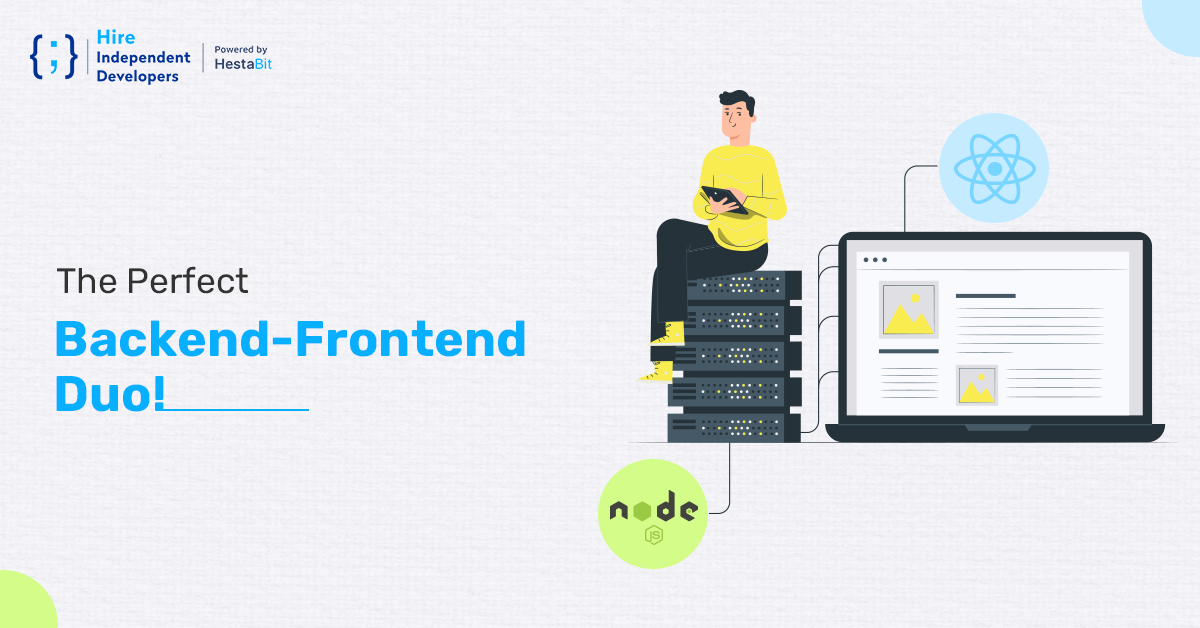 Some technologies act as a perfect complement to each other such as NodeJS and React. We are familiar that the buzz around these two incredible technologies creates a debatable ecosystem. However, with thorough research, we were able to reach a dynamic conclusion. When we talk about using React with Node, certain questions emerge from the context. Some of the frequent queries from the product owners are:

Do not worry; we won’t keep you waiting for long to find all the answers. When we asked some industry experts to choose one JavaScript library, they addressed the fact that both React and NodeJS can be used together within an environment as complementary technologies, which brought us to another what, why, and how. Now, before we begin with understanding both technologies, here’s an easy road map to the contents ahead of you.

Let’s begin the ride with a basic introduction.

React is an open-source JavaScript front-end library specialized in building interactive user interfaces and UI components. React is also used to create single-page applications (SPAs). This leading library is maintained and backed up by Facebook.

Similar to many other libraries, React operates on web servers like Apache and coordinates well with the backend like PHP, Ruby on Rails, and Node JS.

In addition to all the above features, React constantly analyzes the algorithm and takes instant action in case of disturbance. This is why it has become a primary choice for owners and enterprises looking to develop robust applications.

NodeJS is a JavaScript backend runtime environment also considered as a full-stack JavaScript framework. If we stick to the recent NodeJS survey reports, it concludes that more than 45% of the JavaScript developers acknowledge that it is an exemplary framework for enterprise and eCommerce development. You get everything within one setup when it comes to NodeJS. There are event queues, web sockets, and microservices for modern web solutions.

The popularity and strength of NodeJS are already known to the world. Being highly versatile in its features, giants like Walmart, Twitter and NASA hire experienced NodeJS developers to build exclusive backend environments.

How can we use React with NodeJS in web application development?

This will sound quite astonishing, but NodeJS is actually a reliable and convenient platform for hosting and running servers for React applications. How is that possible? We will give you two significant reasons for the same:

Not only this, when you use NodeJS to host and run the web server, you get the following benefits:

Taking a few scenarios into account, changing the backend entirely is not feasible for many enterprises. Let’s assume you have RoR (Ruby on Rails) as your backend. You can still leverage NodeJS to run your web server hosting.

NodeJS offers some efficient and dedicated tools that can be owned with the Node base server. Node’s assets can be used to develop the RoR pipeline asset, and further, you can leverage the commonJS to make your work a lot easier.

Coming back to the working of Node and React together. Here is a gist of how both technologies operate in a single environment.

Overview of Working of NodeJS with React:

React is a library that renders the interfaces of mobile and web applications. On the other hand, NodeJS is an environment to manage data communication on the server side. Node for eCommerce is the best example of how this framework networks real-time data management for businesses.

Both React and Node exist in the developer ecosystem. While React can build the UI components on your frontend, NodeJS can handle the data at your backend.

In a real-time demonstration, when a user interacts with your user interface (React), a server request is created where the browser sends data from the specified directory from the backend (NodeJS). So, React as a front-end framework will take care of routing and navigation and loading of the components, while Node as a backend framework will provide a regulated environment for this process.

Meanwhile, if you are convinced to use React and NodeJS together, here are a few conditions where this duo can create wonders and save you extra time and effort.

Five reasons to use NodeJS and React for efficient development.

Coming back to specific conditions that may benefit you by using NodeJS with React, here are some of the best ones.

If your React application is data-intensive where it constantly asks to handle multiple requests without imbalancing the server load, using NodeJS can be a big help to you. Mastering the asynchronous pattern, NodeJS can handle various bulk requests without compromising the loading time.

If your React application’s core is entirely based on real-time data streaming or data management, using NodeJS is highly recommended by the experts. This way, you would not have to worry about the persistent server connection.

If you build your JSON APIs with NodeJS, your React application can actually turn out to be effective and productive. React also promises easy code sharing and code reusability, which is just the cherry on the cake.

Here’s a suggestion- Create a Single page application in React using NodeJS for the lightweight backend. You get two advantages out of this:

There is support for asynchronous data loading through the callback function, and your application does not suffer from bulk requests.

You can also use NodeJS with React with the MERN stack (MongoDB, Express, React, and Node).

Yes, we have tried answering all the common queries that come with NodeJS and React. The opposite JavaScript libraries can create magic if put together in a single environment. This backend-frontend duo also allows you to perform all sorts of scripting in a limited timeframe. One key factor to remember if you are using React and Node together is that you must focus on operating NPM. If you follow the guidelines appropriately, you might be able to take your projects to a higher level. For more technical insights on React-Node, we would recommend seeking services from expert developers. They may also help you with a smoother development run

Do let us know if this duo worked out for you.