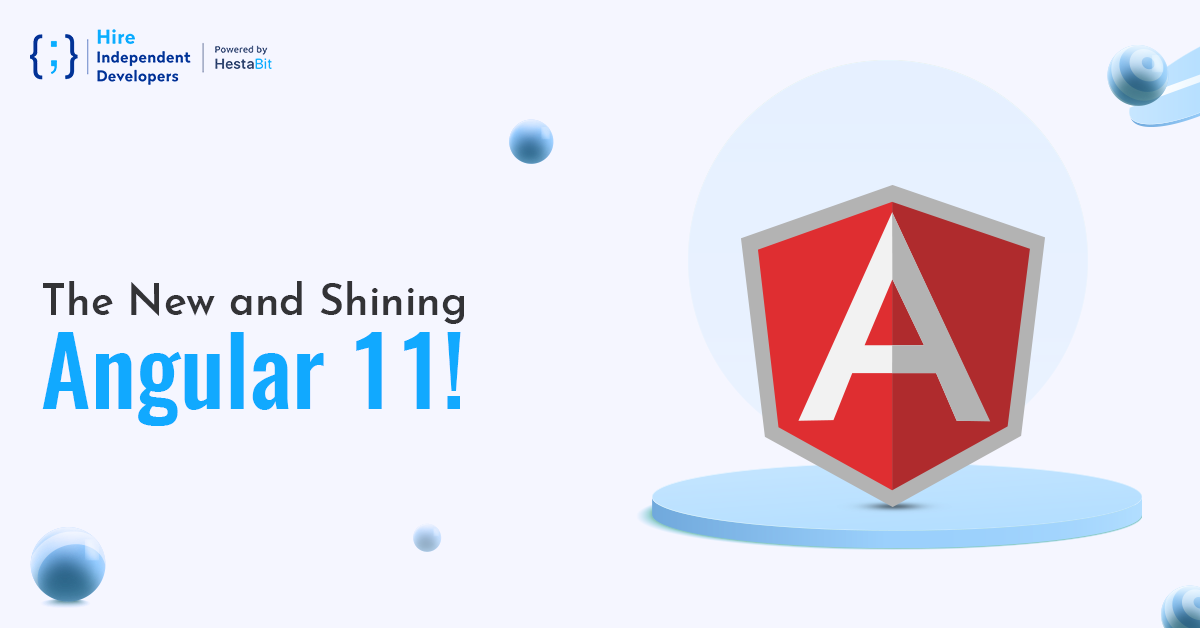 Angular has always been one of the most prominent technologies since the time of its launch. This web-development framework can make you achieve all your goals, from creating brilliant single-page applications to dynamic web apps.

AngularJS is an open-sourced web development framework that works on the front-end of any application. It simplifies the development and testing of an application by providing them with a framework for client-side MVC (Model-View-Controller) and MVVM (Model-View-ViewModel) architecture.

Not just that, it also offers components that rich internet applications use.

With advancing times, Google has released the latest version of the popular Angular- Angular 11!

Angular 11 new features are such that it is believed to be super powerful. The version was made available on 14 November. The latest version aims to improve the overall developer experience by addressing the community’s issues regarding bugs.

The release provides multiple improvements that simplify the development process for companies working on Angular projects.

Analyzing the significant changes introduced by Angular 9 like the release of iVY, then the typescript 3.8 support provided by Angular 9.1 and the modifications introduced in the Material UI in Angular 10 indicate the dedication of fixing the common bug issue that has been accumulated over the years.

The goal is finally tick marked with six months of rigorous work with Angular 11.

Let’s figure it out!

The Google-developed web framework has released a new version with incredible improvements such as stricter types and automatic inlining of fonts. The automatic font inlining will be made available by Angular 11 for all updated applications.

That’s not it, there is so much more to Angular 11, and that’s what we are determined to share in this write-up.

One great Angular 11 feature is Operation Byelog, which focuses on investigating a substantial development effort towards PRs and triaging issues before clearly understanding the extensive community’s needs. Angular 11 gets done with the initial objective. All the issues can be successfully triaged in the three menorepos that will move forward with taking it as an ongoing effort. At the same time, there are new issues reported simultaneously.

The process also solves some of the prevalent concerns associated with the router and forms. All the encountered issues are now to be triaged within two weeks of being reported. This reduces Angular backlog’s size and solves many problems.

The component test harness allows the communication of the components by making use of APIs. Angular 9 first introduced this feature. These APIs grant the ability to form a communication bridge between elements in a similar way for the end-users. And tests can be encased themselves with DOM changes.

Earlier, only Angular material was supported by this mechanism; however, with Angular 11, a component harness is made available for every component.

The latest angular update has made the Angular team shift its support. Earlier versions of Angular worked on TypeScript 3.9, whereas Angular 11 provides the robust support of TypeScript 4.0.

The reason backing this update is to provide better speed to the builds.

Angular 11 is a guarantee of faster builds compared to the previous versions.

The Hot Module Replacement refers to a mechanism allowing the replacement of modules without needing a full browser refresh. However, Angular developers are indeed familiar with the concept of HRM since older versions also supported them. Nevertheless, the features of Angular 11 allow a developer to put less effort into configuring the HRM, thus accelerating the development speed.

You must have heard of Webpack; the technology is used in compiling a huge number of files into one single file or a single bundle. Webpack 5 was recently released. Thus it is the most updated version. Even though it is not yet fully stable, Angular 11 provides experimental support for it. ‘

It can be effectively used with Angular 11 to test your hands on new and unique things.

The release notes suggest that the Angular team believes the use of Webpack 5 can be positively implemented to achieve the development of smaller bundles and faster builds once things get more in position.

Angular’s language service offers code editors a way to get errors, completions, navigation, and hints within the Angular templates. It can work with both inline templates and external templates in HTML files.

Even though the feature is still being developed, it can behave in a similar manner to the Typescript compiler.

The introduction of Angular 11 offers updates in build cycles making improvements in some key areas. They are:

2. Once- the Angular compiler

All in all, the Angular 11 version improves the TypeScript compiler in terms of speed to make transformational updates in the Ngcc.

The Ngcc update is almost four times faster in the new Angular version. This implies there’s no need for users to spend a long time waiting for the completion of builds and rebuilds.

This change will be introduced in TypeScript 4.1 as well, so when Angular can support the TypeScript version 4.1 in fresher versions, the builds will be faster.

Other Changes introduced by Angular 11:

The recent version of Angular offers many remarkable features, as we mentioned above in detail. However, there are some other groundbreaking updates as well that the technology brings with it.

These features make Angular 11 even more exciting and lovely to use. Although these changes are comparatively smaller than those mentioned above in the write-up, they still hold greater significance when developing an Angular project with the latest version.

However, we must remind you to always hire Angular Programmers before moving ahead in developing your project. A highly optimized project is what you need to set a firm foot in the market and not be swayed by the competition.

The smaller yet great changes are:

We hope this write-up helped you get a clear understanding of the Angular 11 features that are new, fresh, and improved.

Although we have covered everything relevant, however, if you wish to gain deeper insights, you can always check the official website of AngularJS.

The massive community can also be a great source of information if you wish to learn more about the recent Angular version.

If still not satisfied, you can always hire Angular programmers and consult them regarding the new update and how it affects your existing or upcoming project. You can also develop customized solutions if you make the wise choice of hiring professional help.