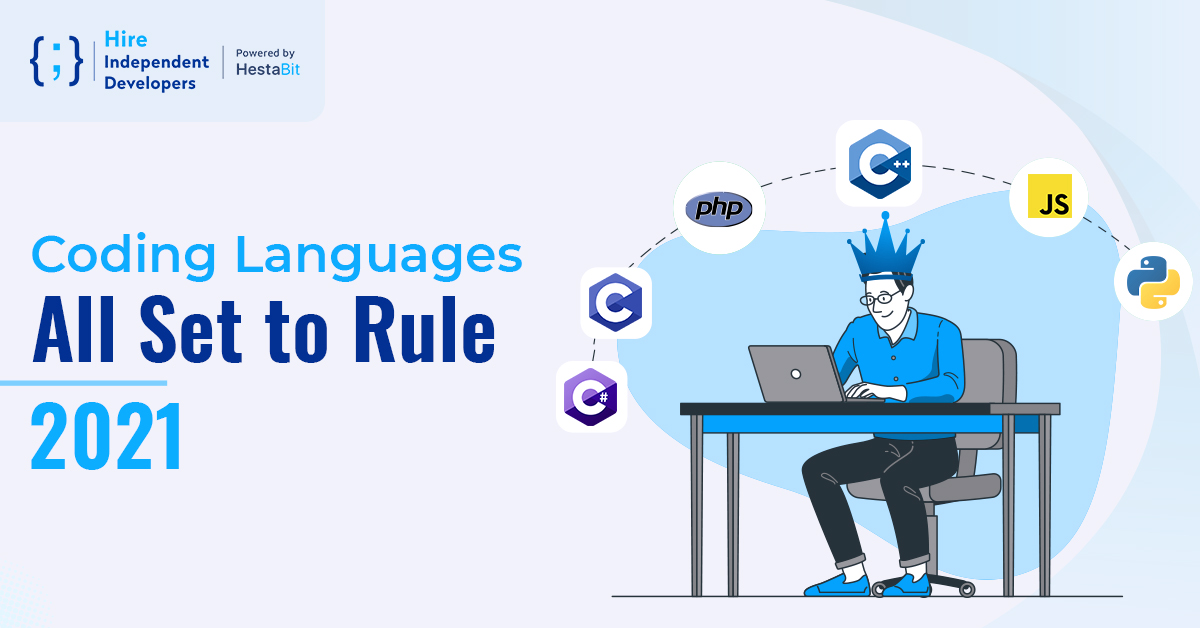 The desire and need fluctuate and continue to change as the technology evolves from time to time! One major pillar of technology that manages to make it keep flourishing is none other than the programming languages.

There are many programming languages out there, of which the prominence and interest happen to change every year.

So, the question now is, who all would be in demand the next year of 2021 all across the world?

We have the answer to this question ahead in this write-up.

So, before the time flies and next year arrives, let’s find out the best coding languages that would not be just staying in demand the following year, but are also the ones you must try to accomplish your business goal or any project.

Most In-Demand Languages in 2021

The number of programming languages in today’s time is already massive. Contending with such a major number is unimaginable as each language is experiencing various phases of upgrades or improvements to be on the top. Undoubtedly, they will all make it to the end goal.

Nonetheless, the ones who have already arrived at that point and become a part of the rundown of most in-demand in 2021 involves:

Who knew in the 1990s that Python in the future would be so wanted?

Yet, stunning all, it is indeed one of the most famous and preferred programming languages in today’s times and all set to go step foot into the future with the same reputation.

It may not have experienced a brilliant ascent in terms of fame like its competitors such as Java or C/C++, but definitely, by the time, it has built up its own empire. The major shift was in 2008 when Python, with a gigantic update and improvement, presented Python 3. It is today utilized in numerous sections of technical advancement, with no indication of backing down!

Being a comprehensive language eradicating all hurdles on the way to quick and seamless coding, Python is certainly to be seen in the future as one of the most demanded languages for coding.

Some of its noteworthy use cases include Web Development, Data Science, Deep Learning, AI (Artificial Intelligence), Enterprise Application, and many more.

Another in the league is JavaScript, developed by Brendan Eich.

It is one of those languages that no matter how old they become, they continue to successfully and efficiently serve the industry with their impeccable qualities. It can be said that JavaScript, with the passing years, has developed into a multi-paradigm, high-level, dynamic programming language whose main noteworthy achievement arrived in 2009 when Ryan Dahl not just came up with a cross-stage JavaScript runtime, called Node.js but also made JavaScript perform on the server-side. Followed by the same, another even added into the history of JavaScript when Google released a framework based on it, known as AngularJS in 2010. And after that, it’s just a great journey of triumph for JavaScript in the industry.

As of now, JavaScript is one of the most used languages in different corners of the world, with the capability to run smoothly everywhere, ranging from browsers, servers, cloud to containers, and so on. It can be expected to do the same with similar intensity in the future as well.

It can be brought to use for several purposes like web development, mobile app development, server-less computing, etc.

Showing up in 1995, this open-source general scripting language we know as PHP has been doing wonders from that point forward.

From enhancing sites to creating applications, you can do a great deal utilizing PHP.

You can make either static or dynamic sites alongside very user efficient applications with PHP. It upholds cross-platform development and lets you do various operations. Utilizing hashtags and implementing business logic layers as well goes under the qualities of PHP.

The list of some huge and exceptionally amazing brands that use PHP incorporates Flipkart, Facebook, Wikipedia, Tumblr, Yahoo, and more.

Its significant uses include worker side web application advancement, creating CMS frameworks, and some more. Your decision to hire a PHP developer with so many qualities would any day prove to be highly fruitful.

Microsoft, in the year 2000, chose to come up with an innovation of generating their own object-oriented similar to the C language, C# programming language. Anders Hejlsberg here designed C# as a major aspect of the Common Language Initiative (CLI) platform of Microsoft. It is where other languages, too, incorporated together in an intermediate format, which further runs on a Runtime known as CLR (Common Language Runtime).

In today’s date, C# is successfully performing as a multi-paradigm programming language that is being used across multiple platforms, namely Windows, iOS, Android stage, etc. worldwide.

Dennis Ritchie, back then in the 1900s, created a procedural, general-purpose programming language that is assembled directly to machine language, providing low-level access to memory, full power over the hardware, which we now know as the C language.

C language, since its inception, has become one of the most influential and utilized programming languages across the world. It has even influenced the development of many other languages. What’s here to remember is that C

code can not be ported, thus making it not a very versatile language.

However, this doesn’t stop it from being a ruler the next year, too. It has been there and will continue to be there.

It can be used for system programming, deep learning, development of games, machine learning, IoT development, and several other purposes.

Influenced by the language C, along with the combined efforts of Bjarne Stroustrup and Dennis Ritchie, C++ with some object-oriented features came to existence as an extension of C. However, as time passed by, C++ has developed into a multi-paradigm, general-purpose programming language providing low-level memory access and accumulated to machine instructions directly.

Users can enjoy the full authority over hardware with C++ as well. Truth be told, there are way too many features offered by C++ that make it a master programming language!

Since C++ can rapidly adjust to the hardware or any changes, the ascent of GPU, containerization, cloud processing worked more in favour of the prominence of C++.

Well, there is no limit to the incredible programming languages worldwide.

There are still many that you can learn about and try. The ones mentioned above are just a few very famous and stable ones that have been there for a long time and will continue to be there in the future; precisely, 2021!

Others include Go, Scala and Ruby, and many more.

You are here just required to make wise choices of which one suits your project the most, and you’d like to try in 2021.

Also, make sure to reach out and hire a PHP developer, a Python programmer, a JavaScript coder or any, skilled enough to take your project to the desired level of achievement.